I am sorry for writing THREE times in the past seven days. As always, reading is optional; I write for a personal record and for disclosure to others of my what and whereabouts. Ok, Spring has probably gotten here: I say probably because in Flagstaff consistent 70 degree days does not mean that it will not snow. Locals say it has snowed on July 4; lacking proof I cannot say certainly if they are right or wrong, but I hope they are wrong.

Friday was a full day, beginning with the 7am formal scholarship breakfast. Around 120 students received $300,000 in scholarships. They were channeled through the business college so that meant everyone had to wear business-formal attire of suit and tie to breakfast. I was a lucky one who got to sit at the head donor’s table at front center of the ballroom, so I was really glad I took the time to dress presentably. Mr. Franke gave away $115,000 in scholarships Friday morning, $5,000 to me. I was very pleased and surprised at the large amount because most students got less than $1,000. I’m now up to $13,000 I have received in donations this year. There is a lot of money to be had for the asking.

Also on Friday I had two classes and then helped cook dinner for our Chinese teacher who is returning to her home in China in May. A few other classmates and I took food over to her apartment and cooked a Hawaiian meal of spam musubi and banana lumpia. My Hawaiian classmates were in charge of cooking and the menu, and since I am not a cook I tried to look busy and help a little. The food was 好吃 (yummy) and conversation even better.

In between the snows I have gotten in a bit of mountain biking. It’s usually no more than a hasty half-hour loop through the pine covered hills near campus. Today (Sunday) the short simple loop turned into an epic adventure when I had a flat tire at the outside of the loop, 4 miles from home. Normally I wear a bike helmet and have a spare tube and pump along in case of mishap, but it totally slipped my mind today. So today was the day that I had a bad wreck which ended by self and the bike separated by several fathoms , a brushburned back from sliding down the trail on self, and a totally flat tire on bike. I was showing off a bit while my friend took pics on his camera of me in the air.

We had had a successful afternoon up to this point. I blame it on the fact that I was not wearing my clip in shoes for my itsy-bitsy pedals. My feet came off the pedals and then I slid for a ways on my back. This meant a long walk home; with raw spots on my back and shoulders, I didn’t feel like walking but somehow we made it out. 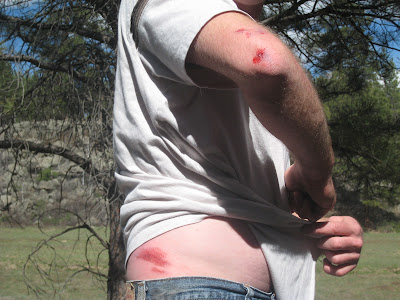 And that’s the last few days, although I left out Saturday and its homework and domestic duties. Oh, Saturday morning I took a leisurely drive downtown and got a coffee and banana bread from one of the many coffee shops over the Washington Post on the Kindle in the open-air plaza under blue sky and bright sun –a very relaxing way to unwind after a long and exciting week. This is the beginning of reading week, the week before finals, and I expect to be cramming until midnight every day. A good feeling it is to be done with finals and sell the books… 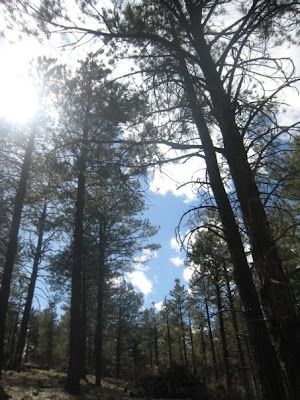 I have a few minutes before Communication class begins, so I will peck away at the blog a little.…

A college campus is a temperamental place. People come and go in waves between classes and like waves between…