When I think of camping, I think of lots of things and situations. Probably the most vivid are the camping trips we did as teenagers in Pennsylvania. A typical outing consisted of going scouting for a spot a week ahead of time, or often we wouldn’t scout ahead, just go and try to find a spot in the wee hours of the morning. Next came the preparation of gathering sleeping bags, coolers, and pots and pans from all corners of the house. Usually we went grocery shopping on the way to the woods, and often this meant grocery shopping at midnight. We’d cruise the aisles and pile a shopping cart full of soda, hot dogs, chips, eggs, butter, bacon, shrimp, sausage, paper plates, cups, plasticware, ice, and whatever else we thought about while walking the aisles. If we were in a really good mood, we went through the express checkout with a heaping cart. Or maybe we ordered lots of burgers, without onions, at the Wendy’s drive-through and then left without getting them. Anything was ok on camping nights.

If we had scouted and picked a spot ahead of time, then all we had to do was drive to it and start feasting. A few guys would get out the Rook game and a carload or two would leave and go back to town for something, or just to drive somewhere, but not without chugging a few Mountain Dews and grabbing a bag or two of chips first. We’d get back to the campsite from carousing at about 4 am, grab another Coke and crawl in the sleeping bag. (There’s a lot of data in the ‘carousing’ word, but I’ll skip over that for now.) If we chose a spot on top of the mountain, it would begin to get light about 5am, and the energetic ones would start chopping wood. The wood chopping effectively kept me from getting any sleep, so I would often join in and help drag logs out of the woods. Well I remember crawling out of my sleeping bag, knowing I hadn’t slept a wink, my eyelids dry, trying to force my eyes to focus on anything. It’s a weird feeling to have to force your eyes to coordinate with each other. I dealt with this feeling by drinking more Mountain Dew and eating more Doritos…

By this time we had bacon and shrimp frying in butter and toast and eggs on the griddle to soak up the grease. My clothes and hair were thick with grease smoke, dirt, and other camp odors. Depending on where we were camping we might put on swimming trunks and go jump in the lake and then play volleyball on the sand courts all morning and into the afternoon. We were never far from a well stocked cooler of Mountain Dew and Pepsi and hot dogs going on the grill. Diet drinks were not part of our vocabulary. By the end of the day we were sunburned all over, dead-tired, and fatigued almost to the point of unconsciousness. I would get home, dump all my dirty stuff in the middle of the floor and fall asleep in my bedroom and stay there for a long time.

When we would go without scouting ahead, we usually ended up somewhere we shouldn’t have been. The youth deals shut down about 10:30 or 11, we would go home, pack up, and cruise the grocery store aisles ’til 1am shopping for food. (Couldn’t even do that in Flag if I wanted to, because everything is closed at night…) I well remember tromping through the woods in the middle of the night trying to find a spring to camp by. We liked to camp beside a big spring so we could throw all our drinks and coolers in the water and keep them cold. Since the best springs usually are in watershed areas for city water, and those areas are technically closed to camping, this meant being rousted out by a ranger in the morning. We always offered them bacon and they always checked our coolers, probably to figure out what made us act so stupid. Also, in spite of the fact that we had seemingly walked miles in the dark the night before, morning light usually found us right next to a road. We didn’t mind leaving; as long as they wrote down a different name every time, we were in good shape. Then the rangers changed their strategy and began making their rounds in the early morning hours instead of after breakfast. We had the challenge of moving and finding another spot before daylight…

Then I tried backpacking. Suddenly we didn’t have room for 60 pounds of ice, soda, and junk food. We didn’t even have a campfire because that smelled up clothes, was too hard to build with only wet wood, and besides we really enjoyed actually getting a little sleep in a night, rather than trying to pull an all-nighter every night for a several days straight. I learned that it made a difference how I felt if I had slept the night before. If we were to hike all the next day we would have to eat only real food during the day and prepare for the next one by sleeping and eating a good meal the night before. Camping took on a new definition; before it had meant total exhaustion and a gastronomic nightmare, in backpacking we actually felt good about ourselves when we got home. We didn’t have to worry about rangers, they were our friends now. I had enough energy left after getting home to clean up my gear and stack it up on the shelf.

So, the question still comes to me sometimes: is it really camping without the junk food?

Camping in AZ is different. The weather is perfect and the stars are awesome. There is no humidity and the higher elevation of Flagstaff cools off nicely after dark. We usually drive somewhere out in the desert (‘desert’ might not be the right word, but I like to use it because it sounds so remote -which it definitely is) somewhere where you can’t see any roads or houses or hear a single freeway -it’s not hard at all to find such a place in AZ. After s’mores we go to sleep and get up in the morning feeling pretty refreshed. Well, almost. Some more about s’mores; try different candy like Kit Kats, Reese’s, or Krackel –Reese’s cups make the best s’mores. The backpackers among us usually make appropriate comments about certain queen sized air mattresses and battery operated inflators that show up. Camping isn’t just real exciting, but it’s always fun to get off campus and relax for a night. Last weekend I got introduced to star-gazing. I like looking at stars, but this is a slightly different version where you hop up and down while spinning in a circle while focusing on one star directly above. It has to be dark for this to work well. It’s multi-tasking to the max, try it sometime. After you go around about 15 times, somebody will take a bright flashlight and shine it directly in your eyes. What happens next is pretty amazing, you’ll fall flat on the ground and it’s like gravity suddenly became really strong and it’s flattening you against the ground. It feels like the ground comes up and pushes you sideways real hard. Pretty cool effect. I think it’s called sensory overload. I also did some real stargazing with Cory, an engineer major who knows a lot about stars and galaxies. (Sorry about the low res picture, it comes from Facebook)

Very few times in my life have I actually seen the Milky Way, to my shame. In Pennsylvania, we’re lucky if we can see 13 stars at a time, although it is better back in the mountains. In the Sedona backcountry, the band of galaxies, the Milky Way?, goes completely across the sky all the way to both horizons. During the night, a skunk visited camp and hauled off with my prized French baguette. I had found a bakery in town that has fresh bread like Panera’s at a lower price. I’m just letting you all know this is a weakness of mine. I love biking around town with a two foot long loaf of bread protruding out the top of my backpack. So, this was what the skunk stole. I let him have it, although Erik and Brie unsuccessfully tried to rush the skunk in hopes of persuading it away. 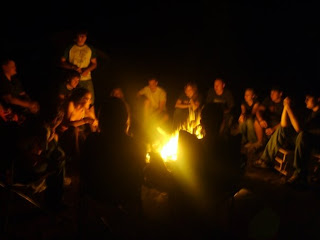 Oh, and we play a lot of campfire games and everybody takes turns telling jokes and Nick’s riddles are the worst. For example:* A man is found dead in his house. There is sawdust and a cane and a rope. Why is the man dead? Answer: The man is a blind midget who works at a circus. Somebody secretly cut off his cane. The midget uses the cane to measure his height. Suddenly he thinks he has grown. He knows he will lose his job at the circus, so he hangs himself.* What person would be able to guess the answer to a riddle like that? *
*

This week ended with rain. Erik, Brie, and I were going to hike up Mt. Humphrey today (Saturday) but…

I’ve learned a few things about Microsoft Word 2007 in the past few weeks. Some days I start…