Ok, so I have a Chinese international student for a roommate. My nickname is now ‘Crazy American.’ Why? There are many reasons, a few of which we are in agreement on. We both drink tea in copious quantities; like 3 gallons in 3 days quantity. We both agree that loud hip-hop music from the guy next door is offensive.

We don’t agree on activities or the lack of them. I maintain that it is healthy to live outside of the room, Davis claims risk of dying is much higher when subject to the unknowns of the world outside the room, namely the sun and swine flu. Dark skin is to be avoided, as is exhaustion. He tells me any sport that requires exhaustion cannot be good for a person—I tell him that sitting in a chair all day at the computer is the greater evil. At the moment I am engaged in an argument via IM with Davis sitting on the other side of the room. Between sentences here I flip over to QQ and send him my thoughts on why he does not need to worry about swine flu. I have already drawn, I think, a pretty convincing argument on the whiteboard, but he sticks to his assumptions, as do I. Below is a picture of my argument, which he is distributing among his Chinese friends to discuss, most of whom are also paranoid of dying during the night from swine flu. Some of said persons are wearing white face masks in public places to reduce risk of airborne contaminates. The numbers below represent the annual incidents of H1N1 vs. all the other types of influenza in one year in the United States. The annual rate for H1N1 is projected for a year at last month’s growth rate. Finally, the Chance of Dying line represents the rate of deaths only among those that already have the respective disease. 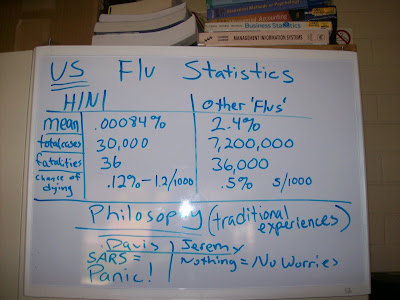 Davis says Americans are crazy because they know how to do everything. Davis is good at math, but can’t stand law, English, philosophy classes, or reading. I tell him that’s a sign he needs more practice in non-quantitative reasoning but he strongly denies it. He asks me how to become more smart and I tell him to do lots of things, not IM all day long. He asks me why I am happy all the time. I don’t know; is it an American thing? He asks me how to never be sick, I tell him to go outside every day and to get exercise (exhaustion, in his mind) and to eat many different foods. I also tell him that his risk of swine flu is much lower if he would get more exercise, but he counters that the risk of exhaustion, death by bicycle accident, etc. are much greater risks.

Who is right? As shown on the board and as discussed in Philosophy class, both of us are right. Well, my time is up, the argument has been shelved for later review. People are stopping in to review the data and share their own conclusions. The sun is high and the sky is blue so I must get outside…

What does it mean to no longer be a freshman? Too many good conversations have been ended when I…

I haven’t posted anything in the blog for some time now; I’ll write a few unconnected lines…