Well, now that I’m settled into life here at NAU, I’ll write a post here tonight before homework begins Monday. It’s midnight and I just got back from grilling some s’mores out on the deck. As usual about fifteen others stopped by and introduced their new friends and roomies. There’s a group here that invites me out with them regularly and they’ve really helped me out a lot with understanding classes and campus life. If I have any questions they’ll gladly answer them, and I ask a lot of questions. There are enough friends now for Ultimate Frisbee games, which we plan to have every Tuesday and Thursday evening. Students from the other halls come over here in evenings for the courtyard and fellowship. Gillenwater is an upperclassman dorm. I really don’t belong here because I’m just a freshman; I’m so lucky to have been placed here rather than some other hall. I’m the only freshman here, and I got in here only because of my age and luck. Sunday morning we’re meeting for breakfast at 10:30, there’s a job fair that I need to attend at noon, and there’s a Floor Meeting here in the courtyard at 7pm.

Friday I attended an orientation for new students. That was an uncomfortable ordeal for me. I learned a lot about academic structure and how and why to choose classes, and it was necessary for me to attend orientation to get priority class assignments. There were 500 students in my group and I think they all were 18 year-olds, quite insecure, and loaded with mascara and skater clothes. We played some games like Red Rover and other elementary stuff. I was just glad to get back home where the cool people are. NAU does one-on-one class counseling for each new incoming student; and it took about an hour to set up a class schedule and figure out what I wanted to study. I was impressed that even with thousands of incoming students, each one is assigned a mentor who helps set up this important schedule. My classes for this term are Art Appreciation, Intro to Computer Info Systems, Academic and Personal Development, First Year French, and World Geography West. That’s a 16 credit semester -16 hours of class a week and 32 hours of homework. I’m not keen at all on the French, but it was a requirement as I’ve not had any foreign language in high school. NAU requires 3 credits of every degree to be in Global Awareness and Ethnic Diversity because it’s a liberal school and is concerned with being ‘green’. Flagstaff is a rather small town, but there is a plenty of energy and activity at NAU.

My roommate Geno is moved in and we get along fine. There have been no conflicts so far, and we both try to go 100% to make things work out. I don’t like being in the apartment except to sleep and do what’s absolutely necessary. Computer work I sometimes do on the picnic table outside. I’m working on a wall mural of New York City to post on the big white living room wall. I found the picture on the internet; see below. ‘Til next time…. 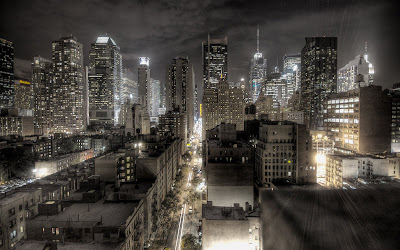 Today was the first day of classes. I got up at 7 and attempted to go for a run,…

Moving is a lot of work. It took two trips from the motel room to the apartment because I…