Everyone who has whispered into the corners in front of the Oyster Bar in Grand Central Terminal has experienced what my algebra book calls the ‘focused ellipse’. Judging from my intermittent monitoring of the corners, approximately 140,000 people a year go into the corners as if being punished for some misdeed. What are they doing? Try it yourself and find out, but don’t whisper anything you don’t want the person opposite you to hear.

This is one of four known locations in the world where the acoustics of the room are perfect enough to be able to hear a whisper from a person standing on the diagonal opposite, even with the noise of crowds of people walking through the corridor. The other places are St. Paul’s Cathedral in London, St. Peter’s in Rome, and the National Capital in Washington, DC.

A theory that seems sensible to me is that the people’s heads are at the focus of an ellipse formed by the greater part of the ceiling. It’s true that the actual ceiling slope ends at forehead height but I exaggerated the height of my little drawing to better show the effect. Enter a little geometric algebra.

It’s easiest for me to think of a room shaped like an ellipse. Imagine that two people are in this room. They both are throwing balls at each other, first bouncing them off of a wall. They find out that if they both stand at a certain spot toward the end of the ellipse, they can hit the other person on every throw, no matter which location on the wall they bounce the ball off of. Also, the paths are exactly the same length, regardless of where they are. The name for this spot is the focus and each ellipse has two focuses. 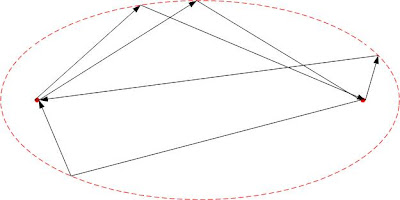 Flip this room on its side and bounce sound waves off of the walls instead of balls, add a floor and short walls, and you have the ‘whisper room’ at Grand Central. 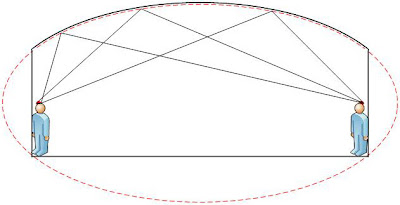 So, if you’re in NYC, remember: Grand Central Terminal, Oyster Bar, Whisper Room -Must Do. I looked all over the internet for an explanation to this phenomenon. I found dozens of sites that mention the room and merely say that the sound follows the contours of the ceiling. Really? I like my explanation better.

The last two weeks have been perfect. The weather has cooperated and given clear blue skies and highs in…