So another week is here. Tuesday is Veterans Day, a holiday at NAU, there are no classes. I hope to get all my assignments done today so Tuesday can be a holiday for me as well. I’ve heard about some cool bike trails I’d like to check out… The big assignment is a four page critique of a sculpture for the art class due Wednesday. My normal inspiration starters haven’t worked; I’ve tried several pots of coffee, researched statues, wrote a couple of unrelated blog posts, opened up Word half a dozen times, made a Word template, made the bibliography –but still don’t have one line on sculpture written yet. I’ve been trying since Friday morning and have been unsuccessful. There’s nothing left to do but start typing.

Monday evening I played bike polo like I have for the past several Mondays. This was the most brutal game to date. I kinked a brake rotor, ripped my new bike gloves, another guy tacoed his front wheel. There are usually a few crashes, but that night we had bad crashes for some reason. The guys warned me about playing with a nice bike and now I’m having second thoughts myself. Monday nights I go to entrepreneur club meetings.

Tuesday was filled with study because of three exams I had Wednesday. I tuned up my bike and fixed a flat tire because I knew the bike would be crucial to my success with Wednesday’s tight schedule. Tuesday night I had the LAA meeting to attend. After the meeting I did Access review until midnight.

So Wednesday morning I did an Access exam in CIS and then went to the library to cram Chinese. I tried to contact my classmates and have them help me, but they didn’t get my emails in time. At 3:00 I went to my Geography professor’s office to meet him for a study session before the big exam on Russia in the evening. When I went to his office the first time, he told me he holds a study session before every exam for those who make the effort to visit him in his office. That was like the jackpot for me –there were two others in the study group out of a class of 100+. There was no way I could have gotten a good grade on the Russia exam without a little inside help. From there I raced back to Chinese class and got there just as they were closing the doors for the exam. After Chinese class I had only a few minutes to get to the next exam a mile away. I dug a pop tart and coke out of the bottom of my backpack and fortified on the ride back to Geography. Wednesday nights are bike club meetings -that was my last stop of the day.

Thursday I don’t remember; I slept a lot of the day and did a few small CIS assignments. Friday evening Paul told me about a group of Japanese taiko drummers that his Japanese teacher had arranged that were playing on campus, and I can’t turn down a taiko or samurai event. The taiko was ok, but Brooklyn’s Sakura Matsuri is leagues ahead of this in terms of energy and crowd enthusiasm. After that I got in on a talk given by a man from Hiroshima who had survived the A-bomb in 1945. He spoke through an interpreter, he had a fascinating story. He was only 1.5 miles from ground zero, but survived the bomb because he was behind a hill that sheltered him from the flash. He lost his mother and other family members. His brother came back home with all his clothes burned off, the side of his body that had been facing the flash was melted off. His brother died a short time later, many of the doctors perished, his house was destroyed, it must have been terrible.

Saturday the neighbors tuned up their drum set and set up a guitar amp. Everybody hates them. 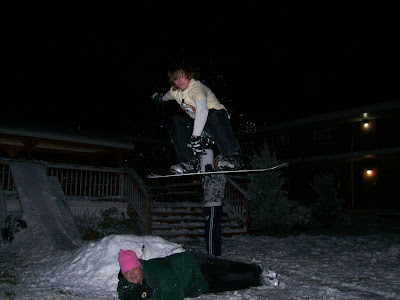 Today Flag got 3 inches of snow -the first snow in town. We constructed a snowboard ramp in the courtyard made of picnic tables, closet doors, and chairs covered in snow. It’s amazing what can be done in only 3 inches of snow. And that’s about it for the week. If you’re in Flag give me a call, we can meet over coffee at Macy’s and relive old times…